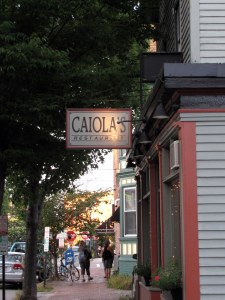 I am going to start simply by laying out the fact that I am undeniably and absolutely in love with Caiola’s. I am biased from the second my hands hit the keyboard and I am more than ok with that. Truth be told, in spite of what my friend Kate says, they serve up the best brunch in town (or within at least a 50-mile radius) and we haven’t gone to another spot since they started serving it over two years ago.

My order NEVER waivers unless there is a very tempting Eggs Benedict to be offered (I still lament being there too late to order the Pork Jowl Benedict a while back). But, because this summer has been unusually hectic we have not been able to pay a visit for several months. Then a little reminder came in the form of the NY Times and their ‘36 Hours in Portland, ME‘ article. While, overall, I thought the article and it’s choices were questionable, it’s mention of Caiola’s did remind me that we had been neglectful this past summer and I was prompted to call to make a reservation at the end of an especially atrocious week (F-U Mercury in Retrograde!!).

In need of instant gratification, and because scheduling would (again) prevent us from going for our Sunday usual, I called and hoped that they would have something available for later that evening. By luck they did–which was not the case by the time we were seated at 5:30 that evening.

There is always a sense of comfort when I cross the threshold of Caiola’s. Larger than Bresca, smaller than Sonny’s, it seems to seat as many as the Front Room–if you count the back room area and patio–but lacks the feeling of being packed in on top of other diners. Maybe it’s the airiness of the room, the Jazz or Bossanova music that always seems to be playing when we’re there or the look of recognition in the hostess’ face when she sees us enter but there is always a sense of ease when we go. Not once have we ever felt rushed through a meal just so they could turn a table and that, to me, speaks volumes on the type of dining experience they want you to have.

But, you’re not reading this to see me swoon over the ambiance (or are you?), you’re here to hear about the food. So, let’s get on with it then.

The Missus ordered the Crab Cakes and, after her first bite found herself not in a sharing mood. But, able to steal the slightest taste from her plate, I found the Crab Cakes to be extremely creamy and full of the main ingredient and lacking in the fillers that you tend to muck them up and weigh them down. My only complaint: make the order 3 cakes so people like myself can actually score a full one from their partners plate.

Now, the last time we had dinner here we split the Polenta Fries and the cheddar sauce–for lack of a better word–and enjoyed them immensely. I find it hard to describe the cheddar side on the dish because it’s not thin enough to be a sauce yet it’s not quite a spread, though it very well could be used as such. Call it what you want but it is simply addictive. Actually the entire composed plate is hard to stop gourging on once you start eating. The fries are a texture freaks dream, crunchy on the outside and smooth and buttery on the inside. Both my partner and I remarked that one would be hard pressed to identify they were polenta if not told about it beforehand. Then you have the salt of the cheddar saucespread and the sweetness of the tomato and red pepper relish and it’s just about all over for me after that. I would say, easily, the full dish hovers around 3/4’s of a pound and I ate the whole thing after sacrificing one of the fries to my partner. I even have evidence of what little was left, compared to how the dish arrived: 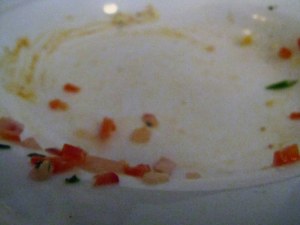 Yet, that wasn’t even the best dish that we ordered. That would come in the form of our entrees, which we both ordered the same thing:

While the presentation was not what I had anticipated–I think my mind envisioned a less brothy dish–it was quite simply the best seafood dish, not including sushi/sashimi at Miyake, I’ve eaten in a long while. Lightly breaded and roasted, accompanied with a small dice of potatoes and wee mussels, the cod was cooked perfectly. It was topped with an unnecessary herbed mayonnaise, which I removed as I felt it got in the way of the overall flavor of the dish and added it to the unused lemon that sat on my bread plate, but otherwise seasoned flawlessly. And funny enough, it was the unexpected broth that we could not stop raving about. Creamy, buttery, slightly fishy and dotted with a few leaves of wilted spinach it was enjoyed so much that we asked for a second basket of bread to soak up as much of it as our bellies could handle. But, at this point we were reaching maximum capacity and, yet, that did not stop us from ordering one more dish.

Because I sometimes have the maturity of a 12 year old boy, my first thought when the plate was set down was “Boobie Cotta!” My apologies now to the person who plated this, as I mean no offense, but my partner and I had a good chuckle before we delved in. I wouldn’t compare it to the Panna Cotta that Bresca is known for, as it seems a different beast all together. Their version is thicker, denser and flecked with a fresh vanilla bean, more custardy, like a version you would make at home. It, like the other parts of our meal, was satisfying and pushed us well beyond the point of being satiated.

With cost of living having gone up for us over the past few months, our trips out for dinner are becoming fewer and farther between. We’re becoming even more selective on where our meager amounts of money is spent but this meal was more than worth the $95 that the bill totaled to. Caiola’s has definitely moved itself out of being a mainly brunch place for us and we will be back soon to dine in for dinner again.

Oh, but I would be remiss if I did not include one thing that made us smile as it caught our eye when we got into our car that evening, hanging from the back patio area of the restaurant: 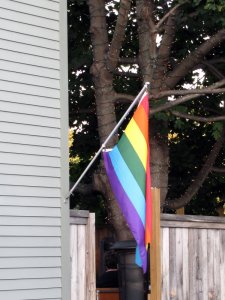