We are the crafter and the cook. The Missus, when she isn’t working or being a full time library student, crafts. And she’s damn good at it. In fact, the desk that I write this at was made by her out of a reclaimed door. Our coffee table? That’s our old wooden futon frame. She’s made me a gorgeous knife roll and apron. Every month, well since her subscription ran out, I buy her a copy of Ready Made magazine. Occasionally, I’ll glance over an issue for things I want to harass her into making or to see what recipes they have that month, but usually I don’t pick it up. This month, however, I made quick work of my magazines and moved on to hers and, for the first time, I actually decided to make something from it’s pages.

The recipe, which I am apparently too unfocused to type out on my own, is from Claire Burnet of Chococo in the Uk. Essentially this is a recipe for ‘Millionaire’s Shortbread.’ While many called for the use of corn syrup and/or sweetened condensed milk, this one had you making the caramel center from scratch. Simple enough, as I’ve made caramel many times over the past few years. I’ve also done a bit of experimenting with tempering chocolate and shortbread is a cinch. Easy enough, right?

Oh, how wrong I was.

My first indication should have been my lack of looking over the recipe and realizing how much inactive prep time I would have as the shortbread rested, baked and cooled. Three hours right there, so it wasn’t the best of ideas to start this project at 8 o’clock at night. 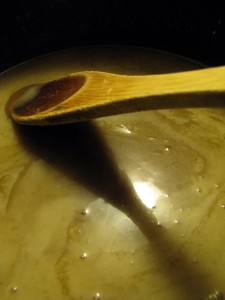 Then there was the time to make and cool the caramel. Another hour or so, pushing things well past midnight before I finished the second step. Exactly what I wanted after a full day of work, right? Well, apparently I didn’t let it set long enough because when I poured the chocolate, the caramel started to run down and around the edges of the shortbread. It was a horrible sticky mess at the time.

But, then there was also the complete lack of realization that I had purchased unsweetened baking chocolate and not 70% dark–something I did not discover until I popped a piece in my mouth to snack on, only to spit it out instantly upon discovering what I was really eating. I made a desperate move and stirred in a bit of Icelandic milk chocolate and sugar to make it edible. Thankfully, the texture on the finished product wasn’t as grainy as I had feared.

One bright note was that I did actually have sea salt on hand, a gift from one of the Missus relatives who is studying overseas. 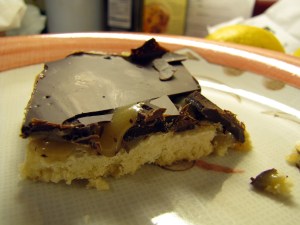 The end product wasn’t overly terrible. The flavors were good and, for the most part, the textures what I had hoped for, though the caramel was still a little loose even after sitting overnight. The whole thing was very reminiscent of a recipe I’ve made before and the much blogged Saveur Chocolate Caramel Tart. I’m sure this is a much better recipe than what I ended up with and is suited for those that pay much more attention than I did.