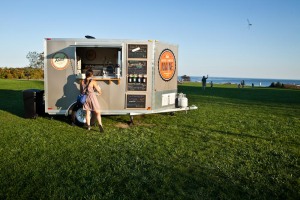 Photo courtesy of the very talented Greta Rybus, who recently featured an interview with Bite Into Maine foodtruck owner, Sarah Sutton on her blog ‘Who I Met.’

In 20 years, when someone decides to write about the food history and culture in Portland, Bite Into Maine will be mentioned. In fact, I believe the article on the Maine focused food truck, which appeared in The Portland Phoenix this past July, is the sole reason headway is finally being made to bring larger scale mobile food vending into the city. Because of Sarah’s honest telling of the red tape and issues they endured dealing with the city, the conversation as to why they are absent from our food landscape finally started to be had. Now, because of the combined efforts of Creative Portland Corporation, along with the input from those in the community who support or wish to operate a food truck in the city, we are no longer asking if food trucks will finally come to Portland but, rather, when.

• Must stay at least 65 feet from brick-and-mortar restaurants.

• May not operate where restaurants are prohibited by zoning, except they would be allowed in city parks and school-parking areas.

• Can park in public parking lots, but not garages. They cannot be parked overnight on city streets or in city parking lots.

• Must have receptacles for trash and recyclables and follow National Park noise guidelines of 74 decibels at 10 feet and 60 decibels at 50 feet.

My one issue with the above is the first one mentioned, the 65 foot rule. In a town saturated with restaurants, I feel this one rule is a bit prohibitive. To my knowledge, there is no such restriction on brick and mortar establishments and their proximity to another, nor does there seem to be one on food carts. You can find vendors in Monument Square just feet from the entrances of other food establishments without issue. So, why restrict food trucks, which will already struggle to find room to park their vehicles, any more than necessary?

There has been some grumbling that it would create unfair competition for restaurants but how? There’s rumored to be a gelato shop opening right across the street from another in town without issue. I may find that a little uncouth, but it would normally be called ‘healthy competition.’ Again, I’m forced to ask, “Where’s the difference?’ More so, where is the perceived threat to established, sit down restaurants? Are you going to cancel your reservations at Grace because you spot a waffle truck up the street? Unless you’re stoned, and the prospect of walking into a converted church may spark some regressed religious guilt, chances are that you’re not. People, long before food trucks became ‘a thing,’ had no problem deciding on what restaurants to spend their money at based on a myriad of factors. Throwing food trucks into the mix changes absolutely nothing, except to increase choices. People will go where their wallets and stomachs lead them. It seems like an issue is being made where there truly is none.

So finally, it seems, that ‘America’s Foodiest Small Town,’ has decided to wake from its slumber and not sleep through one of the trendiest of trends to sweep through American food culture. We may be a little late to the party, but at least we’re getting there and, fittingly enough, we have a lobster roll vendor to thank for it.