Maple’s is at the heart of the bowl of sin, blending their already wonderful Gelato with bits of crushed up Mexican styled chocolate from Taza, of Sommerville, MA. What Taza does, traditionally stone grinding the chocolate, isn’t being done really any where else in the US. The process makes for a very unique (coarse) texture to the chocolate and concentrates the flavor, making it more intense.  Maple’s chose one of Taza’s spicy flavors (Guajillo? Chipotle? Cayenne? I’ve already tossed the empty container) and blended that in, adding a nice warming touch with the nibs of chocolate.

Warming? Who am I kidding?  It’s hot. Pretty darn hot, at that. It’s not as ridiculous as the Habanero Gelato I’ve had, but it’s up there. The Missus described her encounter with it as:
“It’s so damn spicy.” (takes another mouthful) “But, the chocolate is so good.”  (takes another mouthful) “But, it’s so damn spicy.” (repeat until the bowl is empty)

That’s where the Fat Toad Vanilla Bean Caramel comes in. I had the ingenious idea of adding the Vermont made goat’s milk caramel to take off some of that heat and it worked, to a point.  It was thick enough to act as a barrier and the milk, itself, knocked down the heat a few notches. It was tolerable but, in the end, my mouth still felt like it was on fire. But, it’s one of those lovely pleasure/pain moments with food, that we endure because the pleasure (Maple’s chocolate gelatos and sorbettos are some of the best around town) outweighs the pain.

If you like to have your ice cream or gelato make you sweat, then look for Maple’s Mexican Chocolate flavor at a multitude of locations (from here to Connecticut). For Fat Toad Caramel, they list William-Sonoma as a seller, but I’d suggest ordering directly from their online store.

‘Tell me what you eat, and I will tell you who you are..”–Jean Anthelme Brilliat-Savarian

Some people get a kick out of going through other people’s medicine cabinents to see what secrets their friends and neighbors are hiding–and lets face it a good number of our friends and family are on some pretty fucking interesting medications. But, that just may be me projecting(Busy Brain is as interesting as I get these days). My little fetish is that I’ll snoop your fridge for an insight in who you are. With all of us either labeled, or self proclaimed as, ‘Foodies,” your refrigerator holds your modern shame. If I had taken this photo one hour later, you would have seen three cans of Pepsi Throwback on the top shelf. If I had photographed the vegetable crisper you would have seen a noticible lack of vegetables and and abundance of cheese: Petit Agour, Dubliner with Stout, Dubliner Cheddar, 8 year Gouda and VBC’s Herbed Chevre.

Some of our predilections are obvious and well established, like the ones in my family. I have a feeling if I were to walk right now into my mothers house and open her freezer, there would be 5 gallons of ice cream, frozen dinners and frozen meat. My sister, Rachael, would have left over pasta and meat balls and lots of milk for my three nephews and brother in law. There would be something in there made out of one of her cuilinary school books. I’m guessing there would be remnants of a cake.

This is a look inside of my refrigerator, something very few have actually seen the inside of–the most notable person being a vegetarian coworker I traumatized by showing off my pickled tongue to. I think my food experiments freak a few of my friends out. Hmm… that explains so much..

In the past 9 months, and 4 since I last laid some numbers on you, 20,000 nosy, curious people found their way to this page.

Ok, I’ll admit it right now… this post was intended to be done just about a year ago. It was football playoff time and I was watching whatever game I could get with our non-cable set of rabbit ears (this was before we were living the high life and had cable).

Then the ad came on, a mash up of old and new players, set to Bob Dylan’s ‘Forever Young‘. It was sentimental and well done and it made me want the soda. I was hooked.. I needed to have a can. Right then. This would hold no significance for me had I not gone without having a Pepsi(or Coke or Tab or RC Cola–the latter two were very popular in my house growing up) in over seven years. I swore off caramel colored soda, opting only for ginger ale or ginger beer or the more recent addition of the locally brewed Green Bee Soda.

So, my next jaunt out to Hannaford’s found a 20oz bottle in my basket. Actually, I think there were three and one Throwback Mountain Dew and the ‘Heritage’ Dr. Pepper for the Missus to try. Those two, according to her, were absolute shite. The Pepsi, however, was enjoyed. Highly. Not only were those bottles consumed but more were purchased. Until, that was, it ran out. Then we didn’t see it again until later in the summer while shopping @ BJ’s Wholesale. We bought a few cases, which lasted us well into the fall. And then it was gone again.

But, a year later, it’s back in time for the Superbowl. This time I found it at a Hannaford’s in Falmouth, which I went into while waiting for Harmon’s to open. I bought three cases and we’ve already gone through one–and since that initial purchase, the Missus has picked up yet another.

I do feel a bit of shame over this obsession. I know far too many soda addicts and knew that when I bought it chances were that it was going to turn into an obsession. But, there truly is a nostalgia factor for me. It does bring me back to being a kid, when soda was almost always in the house. The flavor of it is exactly the same and you can truly taste the difference between their use of High Fructose Corn Syrup in the regular Pepsi vs. the natural sugar in this one.

So, I’ll enjoy this obsession while it, and the NFL Football season, lasts. I’ll be waiting anxiously for both to return again in late summer.

First, you notice the sweetness of the sauce. It catches you off guard.. a far cry from the standard marinara sauces on pizza you’re use to. Then comes the saltiness of the cheese, noticeably taking the sweetness just a step further. There are some herbs topping it all off but they seem more for show than anything else. All of it laid out, very generously, on the airiest crust in the world of Portland pizza. This is not a crust you leave to go stale on the corner of your plate or give to your friend. You covet this crust and all that goes with it. And, after you’ve consumed the pound (it has to weigh at least 3/4’s of one) piece, known simply as “The Slab,” you’re satiated, a bit punch drunk from it’s awesomeness and already plotting your next trip to Micucci’s to grab another.

There are fewer things in life that I love more than Caramel. Christmas, Easter and Halloween favorites always contained the gooey substance and more than a fair number of baby teeth were lost to Sugar Daddy, Sugar Babies and Milk Duds (not to mention a stray Charleston Chew, but nougat is another story all together). So, it is no surprise that my crutch to lean on in recent stressful times (yea, I’m a stress eater) is a locally made Caramel and Sea Salt brownie. 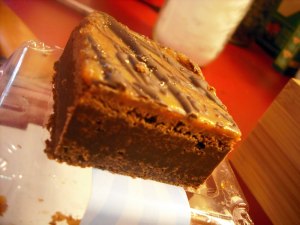 My growing obsession for the line of Simply Divine Brownies came as a bit of a shock to me as, honestly, I’m not that much of a brownie fan. However, I have a hard time calling these brownies as everyone that I’ve had has more resembled a firmer fudge or truffle than a brownie. The texture is rich and buttery with only the slightest bit of crumble to them. Because they require refrigeration, I eat them cold in little slices basically unable to wait the time for it to come to room temperature. They are a treat, to say the least, and trying to consume a full one in a single sitting may require medical attention. However, with the month I’ve had, I’ve tempted fate on more than a few occasions.

Their newest, Caramel and Sea Salt, is like having a giant Sweet Marguerites truffle (if you haven’t had a Sweet Marguerites Sea Salt Caramel, stop what you’re doing and hunt them down–that’s yet another caramel based obsession). And, while I could always use a little more caramel, for the non-glutton the amount is perfect and the salt is just enough to remind you that it’s there. And, needless to say, these are best paired with an ice cold glass of local raw milk.