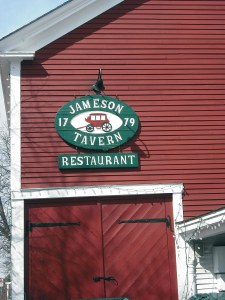 A restaurant doesn’t need an unusual dish, signature cocktail or an impressive cheese list to get my attention. Sometimes it just needs a good story, especially one of a supernatural nature, to entice me to it’s door. That was the case with The Jameson Tavern when we took a day trip to Freeport this past week.

Admittedly, we know nothing of Freeport–I recently made my first trip to LL Bean this past July–so, we relied heavily on the ‘Experience Freeport‘ website for run down on a place to visit for lunch while we were there. It was when the Missus came upon The Jameson Tavern website, and their ghost story, that I was reminded of a recent Press Herald article on haunted restaurants where their name was mentioned. 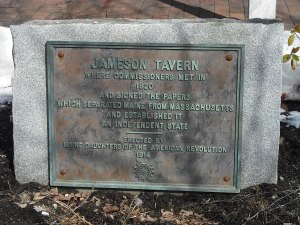 Supposedly, in the restaurant, there are voices–one of a little girl–shadows and eerie feelings. Pretty cool (for a paranormal geek like me), right? After walking through the threshold of the door, which then gives you the choice of a bar to the left of you or a dining room to the right, you could see right away where a bit of the creepiness comes from. Just down the hall, between the entrance and the bar are two gravestone rubbings: One of Dr. John Anglier Hyde and Cpt. Samuel Jameson, both former owners of the space.

It’s a bit of an ominous welcome to a restaurant and the feeling, walking up the narrow and stunted hall, ushers you up to the bar. Again, it’s easy to see where stories of specters come from as the bar, which was extremely dimly lit, lends itself to dark corners and shadows.But, alas, there would be no disembodied voices or shadow play during our lunch, just a few plates of very filling fare.

Now, just about every pub I’ve been to has ‘award winning’ in front of their menu listings for their chowder and it’s usually a 50/50 crap shoot as to whether or not it is actually a good cup of chowder and worthy of that distinction. The JT definitely served up a a hearty cup of it, which served as starter for both the Missus and I. The base, which seemed to have a generous amount of clam broth in it, laid way to an abundance of chopped clams, celery, potatoes(but not too many of them), cream and thyme. Though we did add a bit of salt and pepper, each spoon full held a wonderfully sweet clammy pool of chowder goodness and, I will say, some of the best I’ve had in my seven years of living in Maine. 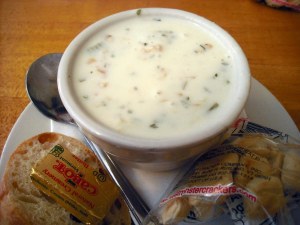 Also, it was a nice little treat to have a slice of bread and butter served alongside the oyster crackers, perfect for getting up those last bits of chowder from the cup. 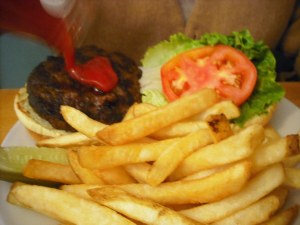 But, while the chowder was great, we were kind of mixed on the rest of the meal. The Missus ordered their Grilled Angus burger($9.99) and was kind of bummed to find it more towards the medium well side, instead of her ordered medium. It had a too charred crust and was pretty damn dry, but she loved the potato roll it was served on and the french fries that were served with it. And, well, we all know that ketchup will fix just about any burger mishap. 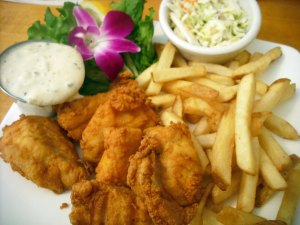 I had the complete opposite problem with my meal. The Fish and Chips ($18.99) had fantastic chunks of battered and deep fried North Atlantic Haddock, and an equally tasty (in house?) tartar for both dunking of said chunks and fries. Honestly, I hated the fries. They were sandy textured on the inside and were slightly soggy on the outside. If not for that tartar sauce, they would have remained, relatively untouched, much like the unseasoned and wet coleslaw. For the cost vs. the quality of my meal, I do feel it was $3-4 overpriced. But, when you’re eating lunch in a tourism driven city, you’re always going to pay more for middle of the road food.

Overall, it wasn’t consistent food and the seats, with their torn and paper thin bench pillows, were noticeably uncomfortable. And, while the chowder and fish was good, I’m not sure it’s enough to have us darkening their door again. Ghosts or not.