This meal began a few weeks ago the Missus and I took a kimchi making course with the very awesome, very knowledgeable Ms. Kate at Urban Farm Fermentory.

Selfishly, I signed up because I wanted to make sure I attended one of Kate’s workshops before she shipped out from Portland in the fall (which may not be happening after all). I also signed up because of rather disappointing trio of kimchi we had at Little Seoul a few weeks before. The Missus does love her kimchi and I thought it would be nice to be able to start making some at home for her. Well, at the last minute she was able to join me, so now she can make her own.

The class was fantastically fun and informative. While I’ve always been jealous of Kate’s canning and preserving ability, I was in awe of how much information she knew on the topic of fermentation and preserving. I wanted to kick myself for waiting so long to take one of her classes and would encourage anyone to sign up for one of the many workshops she’s doing through the UMaine Cooperative Extension. 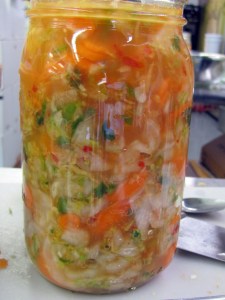 At the end of the class, we each took home our own quart of self tailored kimchi. 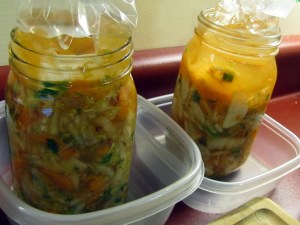 But it would be a couple of weeks–one week getting funky and fermenting on the counter and one week in the refrigerator–before we would get to dive fork first into our creations. Truthfully, I didn’t know what we’d do with them. I’m not an overly huge fan of the dish (some that I’ve tried have been down right rank and overly funky) so there was some pondering over what would would now do with the two quarts that sat on our shelves.

But, drawing on our recent visit to Little Seoul, the Missus suggested making Bibimbap. Surprisingly, this was a dish that her Lithuanian mother made often when the Missus was growing up. My experience with the dish has only been the forkfuls of crunchy rice I’ve stolen away from her bowl when she’s ordered it out. Recently, there was also an article in Saveur magazine that was passed along to me by Lauren. Something in the universe (the Missus, very bluntly) was telling me that this dish needed to be made.

And there are two routes to go, it seems: the simple and the hard. The simple would basically be soy sauce seasoned ground beef over rice and topped off with a fried egg and commercially made kimchi or pickles, while the hard would get you as close to authentic as you can get, either making your own pickled salad or procuring them at a local Asian market. I planted myself somewhere down the middle.

There were definitely a lot of steps and ingredients to this dish with the recipe I chose from Rasa Malaysia website. But, there was already kimchi fermenting and I had, just a few days before, started a cucumber and garlic scape kimchi loosely based on a dish from David Chang’s Momofuku cookbook.

The rice, the centerpiece, took the longest time and most attention. Having actually never cooked sushi rice before, I relied on Just Hungry for a very in depth lesson:

To make 4 cups of cooked rice, you will need:

Measure out the rice carefully into your pot and rinse vigorously under running water. Swish the rice around with your hands – the water will turn a milky white color.

Drain the cloudy water away and add fresh water, and swish the rice around again. Repeat this step 2 – 3 times.

Drain, leaving just a little water, and rub the grains together several times with the palms of your hands gently as if you were polishing them.

Add plenty of fresh water and rinse out the rice. Drain and rinse until the water is almost clear.

Drain the rice in a fine mesh sieve and leave for a little while, preferably at least 30 minutes.

Put rice in a rice cooker or pot. Add the water to the rice. At this point you should let the rice soak for a while. The length of time depends on the quality and freshness of the rice. The older the rice, the longer it needs to soak. Soaking for at least 30 minutes to an hour is generally recommended, but don’t soak for more than 8 hours or so or the rice will get a bit watery and lose any flavor. And if the weather is too hot, it might even start to ferment! (Some rice how-tos emphasize the importance of soaking, but I think the washing and rinsing is the most critical part of making proper rice, which is why it’s described in so much detail here.) Brown rice however does need to be soaked before cooking.

If you are using a rice cooker, just switch on (or if you need the rice later, set the timer; you can calculate in the soaking time here.) If you are using a pot, bring to a boil over medium heat then put on a tight fitting lid. Cook on high for 1 minute, then reduce the heat to medium, and cook for another 4-5 minutes until you can see the surface of the rice, then reduce to low heat for about 10 minutes or until the water is completely absorbed. (Don’t open the lid to peek!) Turn up to high heat for a few seconds to get rid of any excess moisture if necessary.

If you are using a pot, remove it from the heat and drape a cloth over the pan for about 10-15 minutes to let it fully absorb the moisture and rest. This final step really makes a difference if you want grains that stick together but are not mushy or watery. A good rice cooker includes this resting time in the cooking cycle, and also allows for condensation to evaporate, so you don’t need the cloth draping step.

From the Rasa website, I took two recipes–of the five they have listed–and their instructions on assembly:

1. Fill a large pot with water and bring to a boil. Add the spinach and cook for 1 minute.
2. Strain the spinach into a colander and rinse with cold water. Take one handful of spinach at a time, and squeeze the water from the spinach. Lay the spinach on a cutting board and cut into 2-inch (5 cm) pieces.
3. Transfer the spinach to a bowl and add the sesame seeds, sesame oil, and salt. Mix well.

1. In a small bowl, mix together the beef, soy sauce, sesame oil and brown sugar. Let marinate for 15 minutes.
2. Heat a small skillet and stir-fry for 2 minutes. Set aside.

Because the crunchy bits of rice are extremely important (and just really f’ing good), make sure you have the pot (I used a cast iron skillet) until the oil smokes and keep the rice in the pan for at least 10 minutes.

1. Have the seasoned salads and beef prepared in individual bowls.
2. Place a cast iron skillet or pot on medium heat and add 2 tablespoons of the sesame oil.
Heat the oil for 1 minute. Add the rice and spread it around the bottom of the pot to form an even layer. Cook the rice for several minutes or until the rice begins to brown on the bottom. You will hear the rice sizzle. 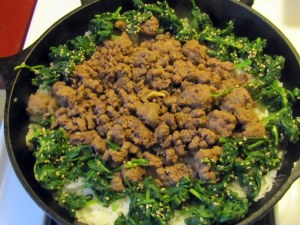 3. Carefully arrange each of the seasoned salads on top of the rice grouping each one like the spoke of a wheel. Place the beef in the center. Continue heating for 2 minutes.
4. Transfer the casserole to a heatproof pad. Set one fried egg in the center on top of the beef.
5. To serve: fold together the egg, vegetables, rice and 2 tablespoons of the Tangy Red Pepper Sauce. Make sure to scrape the bottom of the pot to distribute that crunchy crust throughout the dish.

6. Serve in individual bowls with a drizzle of sesame oil and extra Tangy Red Pepper Dressing.

*You can make one fried egg per person to mix into individual servings.