The other night, like most nights, the Missus and I were rummaging through the kitchen for something to snack on at a later hour. As I do nearly every night, I said out loud the items found in our kitchen to her, whether they were truly snack worthy or not:

I was stuck on the breadcrumbs and in my giggly fog I made a note to make a breadcrumb topped macaroni and cheese on my next day off. It worked out nicely as it happened to fall during a snow storm in Portland(again). As already stated, I love my cheese. At any given time, there are at least four in the fridge–before this was made there were ten.

I went with #6, 8-10–a nice cheddar/alpine combination. I found it very surprising, as I was prepping the cheese, that the Alp and Dell–only aged 3m–was crumbliest of all the cheeses. I bought it purely for a mac and cheese because of it’s bright annatto colored flesh, but it was used sparingly more for it’s color than for either flavor or body. As it turned out, it barely even melted when added to the top before baking. The alpine cheeses listed are both in my top 10 of favorites for winter eating–sadly, I have a top 10 cheese list for just about everything.

The recipe I went with was Alton Brown’s Baked Mac and Cheese and it definitely was the best that I’ve made in a long time. Not only was the consistency wonderful, but the flavors of the cheese(salty, nutty and slightly sour), garlic, onion and mustard really complimented each other. It was served along side a nice bloody rare spoon roast. Perfect eating on a snow bound day.

Preheat oven to 350 degrees F.
In a large pot of boiling, salted water cook the pasta to al dente.
While the pasta is cooking, in a separate pot, melt the butter.

Whisk in the flour and mustard and keep it moving for about five minutes. **I didn’t have mustard powder, but ground some seeds up along side some dried garlic flakes to make the powder.
Make sure it’s free of lumps.
Stir in the milk, onion, bay leaf, and paprika.
Simmer for ten minutes and remove the bay leaf. 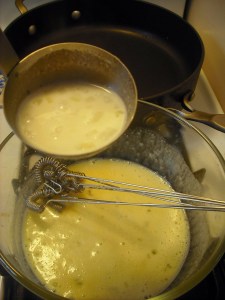 Temper in the egg.

Stir in 3/4 of the cheese. Season with salt and pepper. Fold the macaroni into the mix and pour into a 2-quart casserole dish.

Top with remaining cheese.Melt the butter in a saute pan and toss the bread crumbs to coat.

Top the macaroni with the bread crumbs. Bake for 30 minutes. 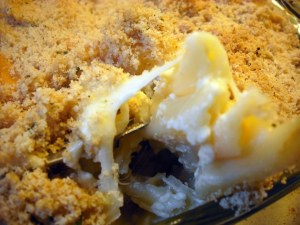 Remove from oven and rest for five minutes before serving. 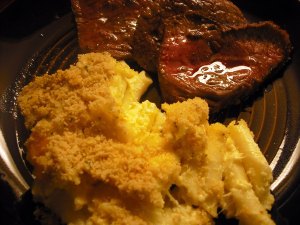 A side note to my love of cheese and of football:
I have a bet going with a friend from Wisconsin that my beloved Chicago Bears will defeat her Green Bay Packers this coming Sunday. I’m cautiously optimistic about the game, but I have already found the closest specialty shop near to her in case Cutler messes up(again).

The wager: I win, I get a pound (or half, we haven’t decided) of Uplands Pleasant Ridge Reserve Extra Aged. I lose, then she gets the deemed amount in the form of Cabot Clothbound Cheddar aged @ Jasper Hill Farms in VT.