Imagine for a moment that you walked into Willie Wonkas Factory, only in this world the chocolate has been replaced by cheese. Every corner you turned, every room you entered, was filled with glorious cheese.

That’s essentially what it’s like to attend the American Cheese Society Conference.

Or cheese rock stars like the crew from Jasper Hill 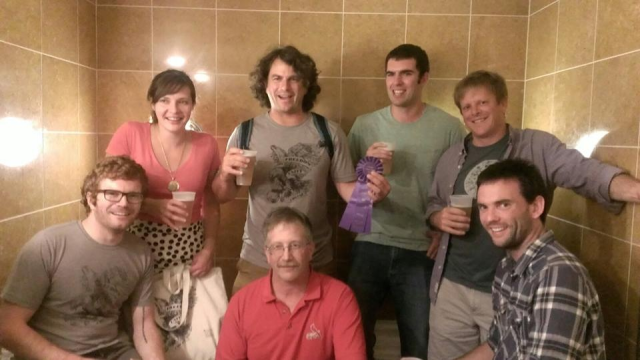 You couldn’t throw a stone in Madison and NOT hit someone that was somehow connected to cheese. Nor could you go more than an hour without finding someone who wanted to feed you cheese. It was like I was living in a mid-west utopia.

We would have to venture outside of our cheese bubble every few hours to snag up some real food–which doesn’t count the endless baskets of Deep Fried Cheese Curd with sides of Ranch Dressing that we ate (my favorite proved to be the ones from The Great Dane pub).

The Great Dane was actually the place of a few meals during the week, including my first, a plate of fish and chips which I had just an hour after I landed with my coworkers from Boston. 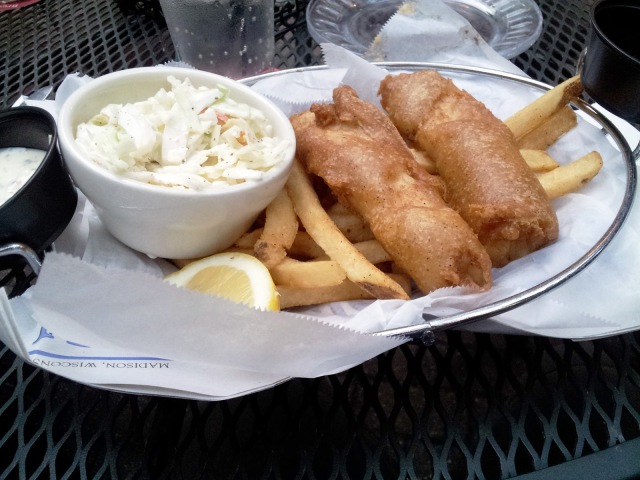 Last day brunch at Marigold Kitchen, which included an omelet with artichokes, tomatoes and asiago, and a few bites of my friends Duck Confit Hash (WHY IS NO ONE MAKING THIS IN PORTLAND?!). 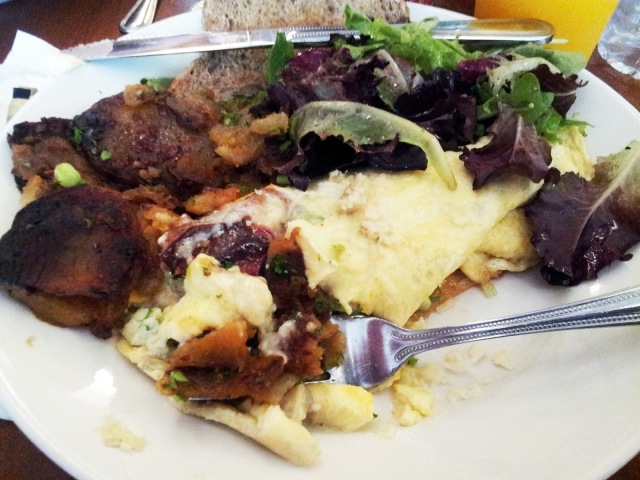 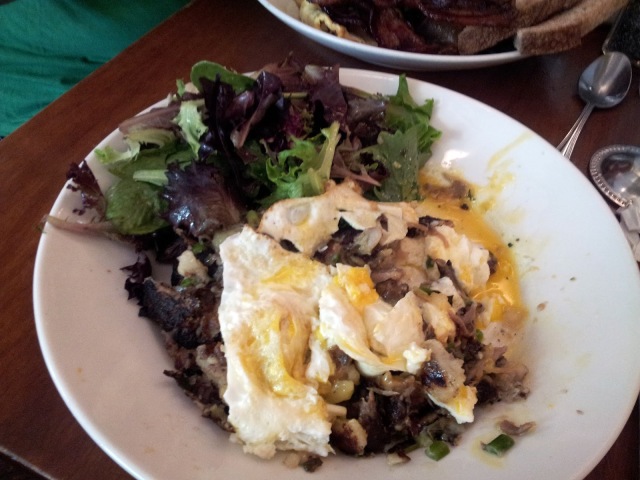 But, my most important stop every day came from Alterra Coffee (now Colectivo as they’ve been bought out by Nestle but they get to keep the Madison location independent from the others).

If I stayed in Madison, it would have been for this.  I love my local roasters, but Alterra bakes all of their bagels, muffins and pastries in house, including this killer biscuit that was stuffed with eggs, cheese and bacon.

But, I’m sure you want to hear more about the Conference..maybe how the exam was?

Well, truthfully, the exam was a good deal harder than many of us anticipated.  Of the 98 of us that represented Whole Foods, I’d guess that one walked out of that room without any doubts or worry, but he was also the guy that played Final Fantasy during our review session the day before the exam so I knew he felt very confident in his knowledge.  The other 190+ people in the room, probably felt good, but through the conversations I had, had some issues with some of the questions that were on the exam, particularly the way that they were worded.  As we’re only the second group to take the exam, there are are still a lot of kinks to be worked out. The true downside is that we won’t find out until sometime in September. But, honestly, I waited five months to take the exam, so waiting another few weeks is a breeze.

And, it’s funny how there was such emotionally and mental lead up to the exam, but as the week passed by it seemed like such a small blip on the map compared to everything else I did there.

One of my favorite classes that I attended was a Chocolate and Cheese pairing class that featured Gail Ambrousius, from Wisconsin. To get our appetites going and our palets honed, she led us  through a brief tasting of different single origin chocolates. My favorite, by far, was an 85% chocolate from Ecuador.

The card says 65%, but it was a misprint.  This was probably the smoothest dark chocolate I’ve ever encountered and lacked any bitterness that you would associate with a percentage so close to unsweetened.

The overall pairings for the class were:

It’s a toss up between the Marieke Gouda and Almond toffee pairing and the Espresso BellaVitano with a Dark Sea Salt Caramel as far as my favorite.  The last tasted like a rich caramel latte, the first was a balance of sweet/salty and creamy/crunchy.

The Friday before the conference ended, the ACS gave out it’s awards for the best American cheeses.  It was essentially the Oscar for cheese, but with more flannel than sequence. Maine represented nicely, with York Hill, Silvery Moon, Pineland Farms and Crooked Face Creamery all taking home awards. But, the ceremony really comes down to the last few minutes of the show, where the top three–or in this case, four–were announced.  Bleu Mont Dairy tied with itself for 3rd overall, with their Reserve Bandaged Cheddar and Big Sky Grana.  I was lucky enough to pick up a piece of the Reserve Cheddar the next morning at the Farmers Market and shared it with co-workers back in Maine.

It had all of the markings of a superb English Cheddar: creamy paste, saliva inducing sharpness and a note of horseradish at the finish.

2nd place went to Grafton Village for their Bear Hill, a sheeps milk cheese with a pretty limited production, so we haven’t seen it around these parts yet (and I missed tasting it at the Festival of Cheese on Saturday).

And, I really should have put money on my call for Best in Show.  I was offered a bet with a vendor, but probably make no where near the money they do… But, man, if I had I would have won with my dark horse pick of Winnimere from Jasper Hill Farms.

How much of a shock was it to the crew at Jasper Hill?  Well, they only sent three wheels to be judged, so when they did eventually win, they had to hike several cases from Greensboro, VT to Madison, WI in less than 24 hours. By car.

As you can see in the picture above, the wheels were perfect and having some Winnimere in August felt like a horrible, naughty treat, as it’s usually not available for several months. It was bliss on a spoon and I could not be more happy for everyone at Jasper Hill for their blue ribbon showing (Harbison, Willoughby, Landaff and Cabot Clothbound Cheddar also took home ribbons this year for the Cellars).

There were so many other great cheeses, in the sea of 1,800 entrants this year, that I’m going to simply sum it up with a few photos of some of my other favorites. 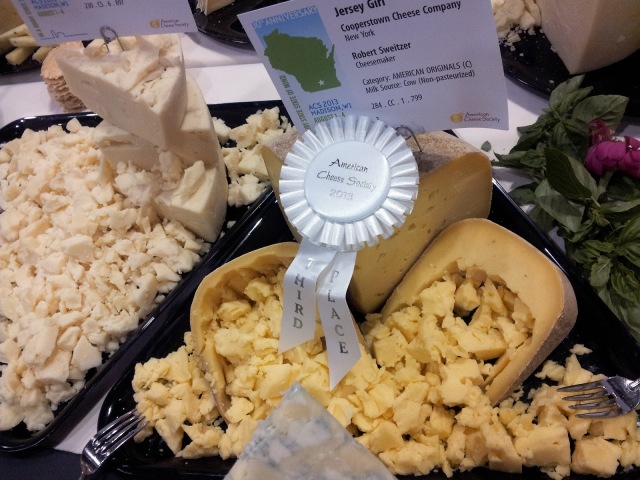 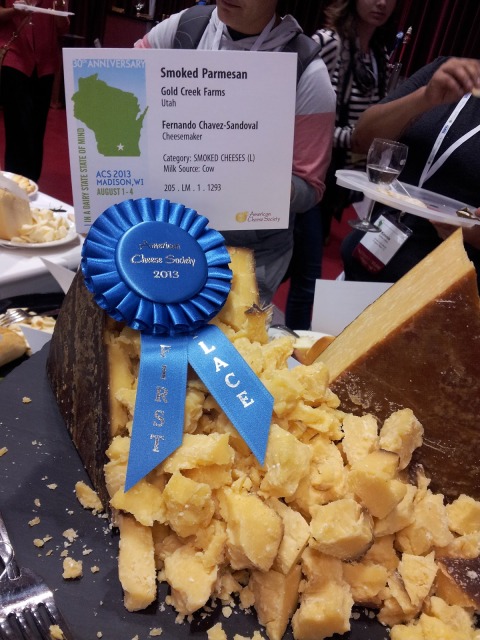 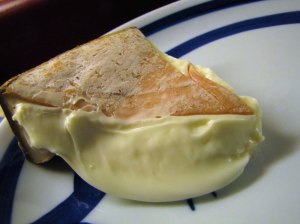 My fingers smell like funk right now. I can smell honey, yeast and must. To be more specific, they smell like the rind of Jasper Hill Farm’s Winnimere cheese and the local honey I paired with it. Six months ago I said goodbye to this cheese as it’s season ended. Six months of hardly touching a gooey washed rind until now. Two weeks ago I saw on the Jasper Hill Facebook page that they were releasing the first batches and then I waited patiently.

Then, while shopping at Whole Foods today I noticed her there in the case. She was a perfectly untouched, deep copper toned round. Had I been $28 richer, I would have bought the whole wheel just to marvel at by myself in the privacy of my own home. It is one of my desert island foods, you see. But, upon looking at the piece that was cut for me, to see how quickly the cheese tried to rush out from it’s rind, I knew it was actually best to not get the whole wheel. Why? Because it’s perfect right f’ing now. In fact, it may be one of the best batches I’ve seen from them since their first release of this particular cheese. But, it shouldn’t surprise me at all because it seems like Jasper Hill is hitting it’s stride. Recent sampled batches of their Moses Sleeper, Constant Bliss, Clothbound Cheddar (done in conjunction with Cabot Creamery) and their Bayley Hazen Blue have been particularly delicious.

My first taste of this years Winnimere was a pleasant surprise. While it had the body of a near overly ripened cheese, it had a sweetness that was extremely reminiscent of a triple creme brie. The slight smokiness of a cured meat–something I absolutely love in this cheese–was more subtle than I remembered it, though the rind itself(washed with a lambic ale) was as yeasty as ever.

You can seek it out at Whole Foods, The Cheese Iron and K. Hortons(I think) for the next six months, as well as it’s appearances on many a cheese plate at local restaurants. Do yourself a favor and buy a small wedge of it. Let it come to room temperature, smear it on slices of your favorite crusty bread and share my obsession. I’ll need the shoulders of others to cry upon come July when she disappears once again. 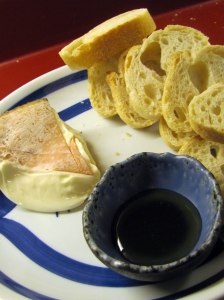