I chose the wood first–a blend of local organic Maine fruit woods–before I had even figured out what I was going to use them in. 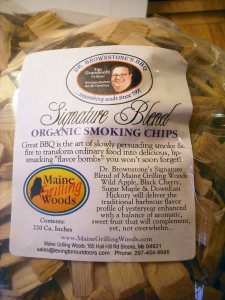 I don’t have a grill, a Green Egg, a tiny stove top smoker box or a gigantic Bradley smoker. Hell, I don’t even have a wok. I’ve never smoked a food product before now nor do I have a general fondness for smoked foods, even cheese(which all seem to remind me of bologna). So, when it was announced that the next round of Charcutepalooza would be: Hot Smoke, I was challenged on a few levels, most importantly not having a damn thing to smoke in.

I am a smoker of a different type, one that would choose the Grateful Dead from Lake Placid (10/17/83) as proper background music for these shenanigans. Catch my vibe? Now being from that school, where early on you learn to make a smoking device out of any and everything, the wok method was the most obvious choice(and the one that would cost me nothing to use).

The NYTimes guide had a set up like this:

And mine, opting for an on hand stock pot, looked like this when it was done: 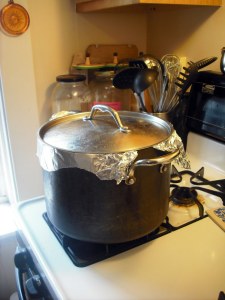 Just imagine the above diagram wedged into this pot. It’s the exact same thing. The difference came in the wood chips, where Mrs. Wheelbarrow suggested using a saw dust powder for the smoke, I kind of missed that part and had a bag of wood shavings arrive at my door. Little details, right? This presented a challenge to me as the wood chips would not naturally smolder on their own so my only option was to check on the smoke every 10-15 minutes and relight the wood chips as needed.

My pork of choice for this month, because I had already brined and cooked some Canadian bacon, I opted for the spicy smoked pork loin and, toying around with the suggested recipe from Ruhlman’s Charcuterie book and threw together a rub that consisted of the following:

That was rubbed onto every inch of the 2# pork loin, wrapped in plastic wrap and left to sit for about 36 hours in the refrigerator. Then it was left, uncovered, for another 12 to develop pellicle to further enhance my chances of a nice smokey loin. Granted, it’s more of something needed for smoking fish but because I was going with the ghetto smoker, I was up for trying any tricks to make this work.

So, when the time came, the flames were lit, the loin placed and the pot was sealed and I sat, like a guard dog, watching for any escaping wisps of smoke and was silently praying that my apartment not fill up with a tremendous amount of smoke. And somehow it didn’t, though the constant relighting of the chips did manage to nearly blind me a few times with the thick smoke. But, an hour later, without a single smoke detector in the building going off, it was done. 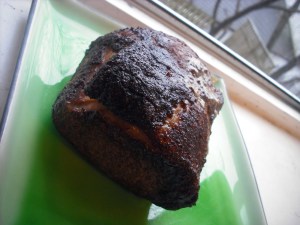 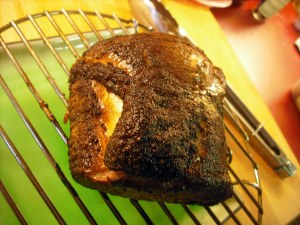 And the results were a smokey success. Not only had the spice rub penetrated the meat and left a subtle sweet and spicy flavor but the fruit smoke, particularly the apple and maple, was prominent without being dense. 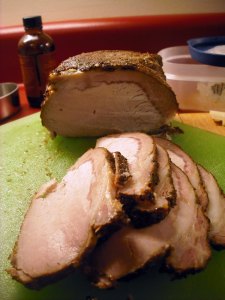 The meal, made of this gorgeous meat, was to be a spicy play on eggs benedict using a mustard cream sauce in place of the hollandaise. Sadly, though, something went awry in the pan and I lost the sauce(I’m blaming not cooking down the wine enough). Luckily, I had some beautiful Quadrello di Bufala on hand to stir into the eggs for a creamy texture. 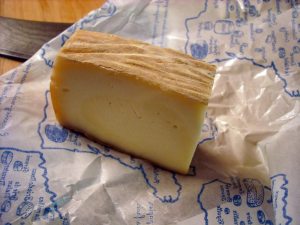 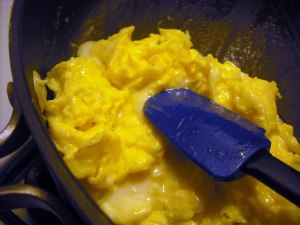 The high fat cheese imparted a button mushroom flavor to the eggs as it melted down.

Served on top of some homemade biscuits, using From Away’s Buttermilk Biscuit recipe, opting for a sharper flavor of cheddar instead of brie, to cut through the smoke and earth of the other pieces of the dish. 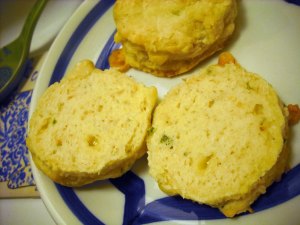 Every bite was worth the effort and embarrassment that I endured, finding myself having to answer my landlord’s question(as I happen to run into him in the building while he was fixing a plumbing issue and I was making the upper floors smell like a Down East campfire) if there had been a small fire in the back hallway. 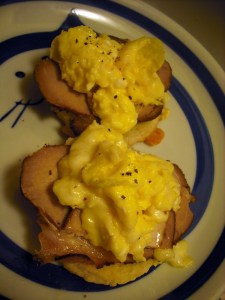 “No, I’m just making a pork loin,” I said, half truthful, as I snuck back up stairs and opened just a few more windows.