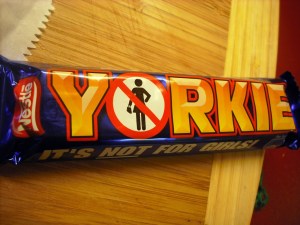 Just so we’re on the same page, Yorkie candy bar is NOT for girls or women in general. It’s right up there with ‘Men’s Pocky‘ as being one of my favorite gender specific snacks.

Being a lesbian it can rightly be assumed that I enrolled in a few women’s studies classes in college. So, with it once being a major, I immediately delved into the symbolism of and choice of such labeling and gender specific packaging.

“So, if it’s not for women, does that mean that you need balls to eat it?”
“Will this bar contain something that only brave men dare eat like ghost chilies, fermented shark fin or boogers?”
“Are the cows treated with testosterone? Is the wrapper treated with BPA? Will I grow a little beard?”
“Are there no women in York, England?”

What did it all mean? I hadn’t read the ingredient list so I didn’t know the contents outside of the chocolate. And it wasn’t until I peeled back the wrapper and found it to be no more than chunks of milk chocolate that the disappointment set in.

What was this? Where was the man sized fete to tackle? I call shenanigans!! Surely there was meant to be more to it, like the bitter chocolate of Men’s Pocky. But, no. Nothing but plain old milk chocolate from Nestle.

Sure, the flavor was better than a Hershey’s bar, and much less sweet than most Nestle made bars I’ve had, but for all the hype and humor of the bars gimmicky wrapper I expected a bit more from it’s contents. But, in the end, the only thing unique or interesting about the bar was the wrapper.